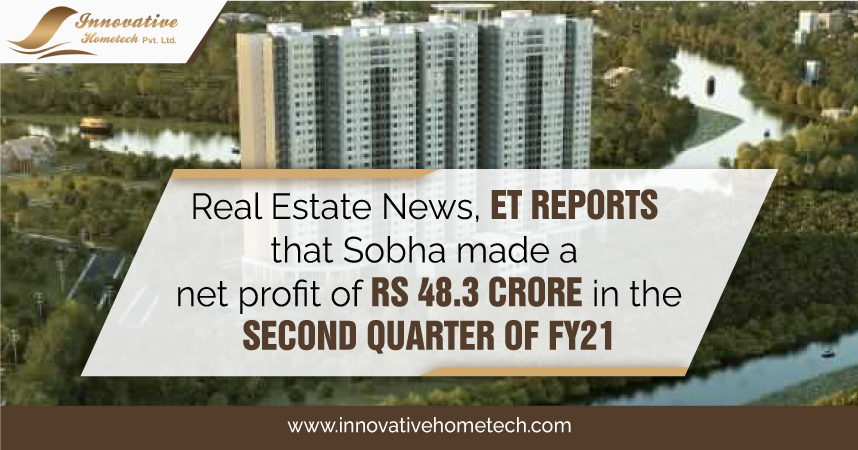 Real Estate News, ET reports that Sobha made a net profit of Rs 48.3 crore in the second quarter of FY21.

For the quarter ended September 2021, Sobha's consolidated net profit increased by 198%. As per BSE filing, in Q2 FY21, the company reported a profit after tax (PAT) of Rs 48.30 crore, up from Rs 16.20 crore in the previous fiscal quarter.

The board of directors recommended the private placement of confidential, secured non-convertible redeemable debentures (NCDs). According to the regulatory filing, the investment will be worth Rs 140 crore in one or more tranches.

Other regions accounted for 41% of overall sales volume in the quarter, compared to 26% in the previous quarter.

"Many communications between purchasers and developers have moved to internet platforms, resulting in seamlessness in commercial transactions and simplicity of doing so," Sharma continued. As a result of this trend, the young Indian generation and non-resident Indians have emerged as crucial potential house buyers. There is an immediate need for all trustworthy developers to implement best practices in the construction of perfect homes, as well as to deliver on time and with transparency and authenticity."

The company received a show-cause notice from the Securities and Exchange Board of India (SEBI) during the current quarter for alleged violations of specific provisions of the SEBI Act, 1992 and Regulations issued by SEBI thereunder, resulting in the initiation of adjudication proceedings in the above matter. The firm has requested time to react to the claims made in the notice in collaboration with its external legal counsel. According to the regulatory filing, it is currently formulating replies to the charges stated therein.